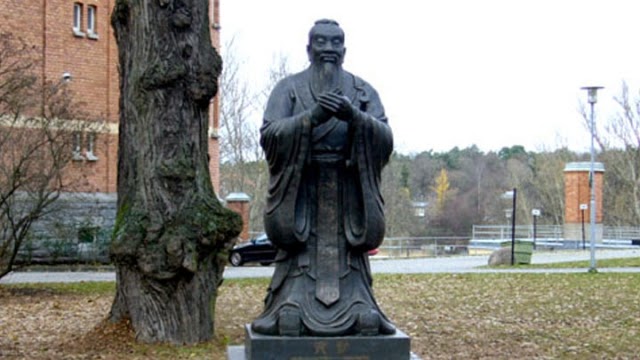 According to information of December of last year, 475 Confucius Institutes and 851 Confucius Classrooms for pupils in secondary schools have been established in 126 countries in the last ten years. These Confucius Institutes are meant to play a major role as a Soft Power promoting efforts to ease the way for the globalization of Chinese culture. Unlike the independent Goethe Institutes and the Alliance française, the Confucius Institutes are associated with already existing universities and high-schools in the host countries. As I see it, this is where the problem rests. I personally feel that the association of the Confucius Institutes with host universities threatens to nullify their own aims. The conflicts that have arisen between Confucius Institutes and their host universities mostly seem to originate in diverging views on what topics can and what cannot be part of the curricula. If the Confucius Institutes were wholly independent, they would of course be free to exclude such topics from their curricula as may not be freely discussed in China.
In the last two years the American Association of University Professors and the Canadian Association of University Teachers have recommended that their associated universities cancel or refuse to renew contracts with Confucius Institutes for the sake of safeguarding the academic freedom of the universities. Negative views on these institutes are also spreading in Europe. My own Alma Mater, Stockholm University, decided on December 20 of last year not to renew its contract with the Confucius Institute established there in 2005, as the first Confucius Institute in Europe.
My own attitude toward the Confucius Institutes is based partly on the fact that a number of university departments of Chinese in the Western world, after having established contact with a Confucius Institute, have turned into centers for the teaching of elementary Chinese, to the detriment of serious research. My attitude is also based on my belief that the HANBAN Headquarters of the Confucius Institutes are less well informed about the cultural essentials of China. Some years ago, the HANBAN decided to initiate a re-translation into English of The Five Confucian Classics (易，书，诗，礼，春秋), to serve as textbooks for the indoctrination of Western readers.
易 is an ancient handbook of divination, written in a deliberately obscure language lacking literary quality and exceedingly hard to penetrate even for scholars who have made a special study of the text. Poor translations of the work have served and still serve as a New Age Bible for generations of hippies.
书 is a collection of archaic documents, mostly fictitious speeches, by prominent members of the archaic society of China, which very few Chinese can read with full understanding;
诗 is an anthology of poetry, containing 305 poems from the first half of the first millenium before our era. Except the folk poems in the section 國風,“Guofeng”, large portions of the text could not be appreciated without lengthy learned commentaries. Bernhard Karlgren has presented a scholarly translation of the whole text, and Arthur Waley a literary translation of the text.
礼 consists of collections of dry as dust notes on rites and rituals of feudal China, mostly of little or no literary value;
春秋 is an annalistic chronical of one of the feudal states (Lu) in the period 722-481 B.C., totally void of literary quality.

This initiative in my opinion reveals a lack of knowledge not only of Western Sinology, but also of the researches by generations of eminent Chinese scholars in the fields of philology and textual criticism from the 漢 Han dynasty to the present day. It also reveals a total lack of appreciation of the appropriateness of these texts as an introduction to Chinese culture.

It seems to me that such a handbook would be far more useful than a re-translation of the 五經。
I would not be fair to myself, nor to the HANBAN for that matter, if I refrained from referring to an incident that took place on the eve of the opening of the European Association for Chinese Studies Conference in Portugal in July of last year, when Mrs 許琳Xu Lin, the Executive Director of the HANBAN, ordered four pages to be torn off from the Conference program which referred to a gift of books from the Central Library in Taiwan and to the support given to the European Association for Chinese Studies by the 蔣經國基金會Chiang Ching-kuo Foundation. Her high-handed action, which was deeply regretted and condemned by sinologists all over the world, has no doubt greatly influenced Western sinologists’ negative attitude toward the Confucian Institutes.
I much regret that many Chinese authorities choose to consider any views that deviate from their own as inimical, aiming at harming China and offending the Chinese people. This has caused many of my colleagues, less outspoken than myself, to prefer to keep silent instead of entering into serious discussions that could have led to positive results.
I wish to assure you that I have the highest regard for the manifestations of Chinese culture, ancient and modern, with which I have come into close contact. I am also grateful that, as a translator, I have been given the opportunity to share with my compatriots some fifty volumes of Chinese literature, ancient, medieval, modern and contemporary, which I myself have found especially rewarding.